Join in January for $0

JOIN FOR $0 THIS MONTH

Whether you're an avid exerciser or just starting out, we have something for you!

YOUR Y AT HOME

Take you first step in becoming a part of something big. The Y. So Much More.

Find a YMCA location near you to get started.

Get a tour and a FREE Day pass for you and your family.

Give or make a donation today to change a life.

Posted by Lauren Acker on Wednesday, 10 July 2019 in YMCA News

While summer is a great time for senior citizens to get outside and be active, medical professionals urge discernment.

Carilion Trauma Nurse Specialist Sarah Beth Dinwiddie shares the following advice: “It’s important to alter the hours in which one is outside,” she said. “Instead of working in the yard in the middle of the day, aim for earlier or later in the day.”

Staying well-hydrated is also important. Seniors can become more sensitive to medication side effects such as dizziness and dehydration. Dinwiddie recommends they discuss medications and these side effects with doctors and pharmacists.

Heatstroke is another serious condition. Signs of heatstroke include elevated body temperature, dizziness and nausea. Those affected should seek hydration and a cooler environment, and seek medical attention sooner than later. Dinwiddie says heatstroke can occur when seniors push on with tasks such as yard work.

She also encourages people to check on their neighbors to make sure they are cool on hot days, and for those who need financial assistance with cooling costs to reach out for help.

As far as sunburns go, Dinwiddie urges all ages to wear lightweight UV protective clothing and stay out of the sun.

Her final bit of advice is to “get outside and enjoy it. Just be careful and mindful of the activities you’re doing.”

If outside activity isn’t practical or safe, there are a number of other senior-friendly exercise outlets in Franklin County such as the YMCA, Essig Center and Phoebe Needles Conference Center.

Upon visiting the YMCA in Rocky Mount, one can find active seniors throughout the building; whether that’s walking or running on the track or treadmill, using the weight machines, or riding stationary bikes.

Elaine Chitwood, 84, has been coming to the Y for 14 years, averaging four days a week. She and her 79-year-old cousin, Louise Wimmer, walk side-by-side on treadmills before making their way over to the weight machines.

“I feel better when I exercise,” Chitwood said.

George Washington, retired Director of Technology for Franklin County Public Schools, was an original board member of the YMCA for four years in the late 1990s, during which time the Y was built. He confessed to slacking off in working out at the Y since his retirement three years ago. He said he’s now coming more often “to get in the routine.”

Exercise classes are available, such as the Strong Seniors class that’s designed to improve strength, core control, balance and flexibility.

The ground floor of the Y is also home to two pools; one is for laps and the other is a warm therapy pool. Seniors Jim and Martha Gilbert frequently use the lap pool. Martha, 72, usually swims at least 20-24 laps (down and back equals 50 yards) and Jim, 76, does at least 40 laps. They also walk one to two miles on the track upstairs.

The couple has been married for 52 years and live in the Franklin County side of Moneta. Jim said he made a healthy lifestyle change in April 2018. He started coming to the Rocky Mount Y to swim and lost 25 pounds.

“I had had COPD. I don’t have that anymore,” he said of his improving health.

At 7 a.m. on Mondays, Wednesdays and Fridays, Patti Ward cheerfully teaches water exercise classes in the therapy pool. While the classes aren’t specifically for senior citizens, the majority of people in the classes are seniors.

Ward has been teaching the classes for 20 years. One of her original students, Ruth Flora, who’s in her early 90s, just recently retired from the classes. Ward said at one point Flora was scheduled to have rotator cuff surgery, but after her work in the pool, the surgery was not necessary.

“It is an honor and a privilege to serve them in their quest for better health,” Ward said. “I just love them so much.”

She said they have formed bonds of friendship that go beyond the pool. She added that new members are welcome to join the class.

“We are a close group, but we are not a closed group,” she said.

Martha Collins, 78, is a water exercise class member. She said her favorite part about being in the class is that closeness, and the exercise helps her improve her flexibility.

Marian Serge, also a water class student, said she admires the way many of her classmates have overcome health concerns related to hip and knee replacements.

Certified pool operator and head lifeguard Field Spicer watches over those in the pools in the mornings. He estimates the average age of the participants in Ward’s classes to be about 70. He thinks it’s great to see active seniors. “You gotta keep moving. I’ll retire some day and join them,” he added.

The Essig Center also hosts activities for ages 50 and older. Line dancing, pickleball, blood pressure and hearing screenings, and classes for balance, stretching and toning are a few. There is also an open gym time and the Silver-Cise Exercise Room. For more information, go to PlayFranklinCounty.com.

In Callaway, seniors have an opportunity to get fit at The Phoebe Needles Conference Center. The center hosts an Active Seniors Class on Monday and Wednesdays from 10 to 10:45 a.m. The light exercise class includes a beautiful view of the mountains for those working on strength, balance, mobility and flexibility. Participants may use a chair during as well as opt out of any exercise that causes discomfort. Classes are free and no sign up is necessary.

Charlie Beckwith, 85, has been coming to the class for about two years. While the exercise is good, he said he particularly enjoys the camaraderie and friendships. He said, “I always leave feeling happier than when I got there.”

Martha Perry, 80, has also been coming to the class for about two years and said she likes the way it makes her feel.

“It’s important for those of us who come because we need to stay fit,” she added.

She acknowledged that the exercises could be done at home but likely wouldn’t get done because there’s something motivating about getting together to exercise. Like Beckwith, Perry says socializing is a big part of the experience. 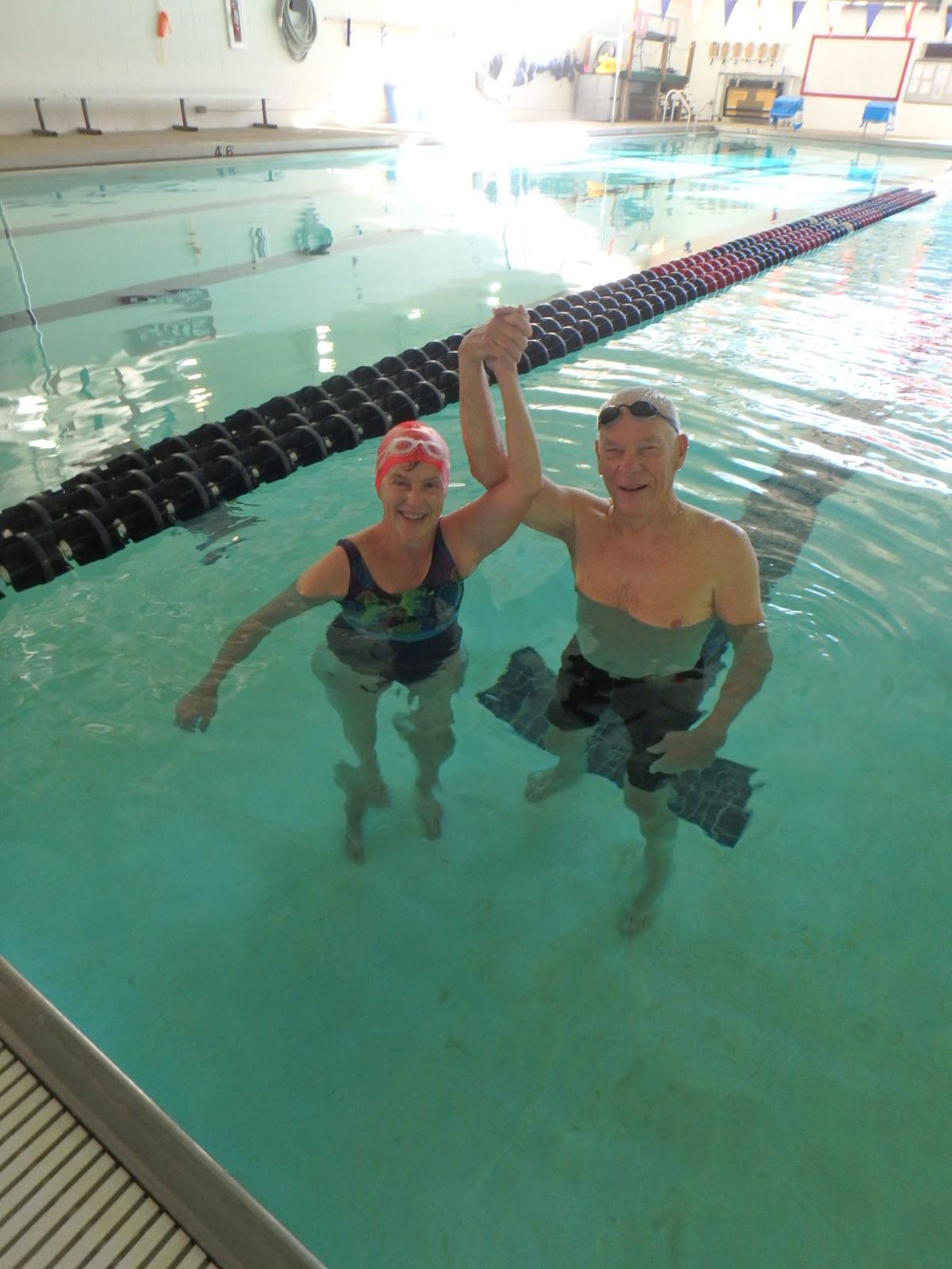 Posted by Lauren Acker on Thursday, 11 April 2019 in YMCA News

Two wrecked vehicles were on display in front of the Ferrum College YMCA for the week leading up to the event with painted messages like “Stay Alive, Just Drive.” An estimated 3,200 people die annually as a result of distracted driving with many more thousands sustaining injuries according to the CDC. At the event students on campus, Y staff and community members could hit the cars with a sledge hammer by making a donation to the Advocate Program that helps surviving family members after a fatal accident.

“People have no idea how dangerous distracted driving can be. So we thought this was a fun way the Y could help raise awareness,” says Victoria Brown Ferrum Branch Director and organizer for the event.

A pledge was also circulated that required the signer to avoid distracted driving. Over 70 Ferrum students signed the pledge which will continue to be available to sign in the coming week. Also in attendance were “CHILL” students from Franklin County High School. “CHILL” is a student group that encourages youth to avoid dangerous behavior with drugs and alcohol.

The high school students set up a demonstration that encouraged students to not drive while impaired by alcohol. “We’re really proud of the Ferrum Community for coming out and supporting this event. We also couldn’t have done it without Danny Lynch towing and setting up the cars and for Chris and Tammy Mather donating them,” says Brown.

Posted by Lauren Acker on Friday, 05 April 2019 in YMCA News

“The talent on display was amazing and all for a great cause,” says Lauren Acker Branch Director at the YMCA’s Smith Mountain Lake Location.

The event, in its fourth year, had well over 200 attendees who enjoyed sing-a-longs, dancing, snacks and an evening of fellowship. Proceeds from the event are used to fulfill the Y’s charitable mission work in Franklin County which benefits youth, adults, families and seniors in Franklin County. The event was supported by not only attendees but by multiple volunteers who helped the evening go off without a hitch.

“Without this type of fundraising event, it would be impossible for the Y to fulfill our mission. That’s why it’s so great to see so many people from the community coming out to support the Y. The great musicians, volunteers and attendees made it a really special night,” says Acker.

Posted by Lauren Acker on Wednesday, 13 March 2019 in YMCA News

swim team participated in the league’s championship meet. The meet was held over the course of three
days, at the Salem YMCA and had 12 teams competing against each other, with 321 individual
swimmers. Franklin County, despite being one of the smaller teams at the meet with 29 swimmers, took
third place overall for the weekend with many swimmers making their best times for the season.

"This year was the first time the team has finished in the top three. We placed third and that is a major
accomplishment for us. We had to outperform teams that had more swimmers than us. We saw some
major time improvements at this championship swim meet. This is by far the best champs we have gone
to. The kids on the Riptide swim team have been working hard this season and it really showed at
champs. We even had two swimmers make regional qualifying times for the first time. I could not be
more proud of the Riptide swimmers. I am excited to see what the future holds because every year we
get better and faster," said Head Coach JT Boyd.

Next weekend is the Upper Southeast YMCA Regional swim meet in which all kids who have made
regional qualifying times from the states of Virginia, North Carolina, and South Carolina will compete.
The Riptide swim team has 7 kids attending the meet this year. Landon Akers, Mallorie Teer, Gabe
Lester, Maddox Conley, Brayden Shirley, Grayson Altice, and Josie Gilley will be representing Franklin
County in Duncan, South Carolina.

Posted by Lauren Acker on Wednesday, 13 March 2019 in YMCA News

Rocky Mount, Va. (December 12, 2018) – The Franklin County Family YMCA Riptide Swim Team hosted its annual invitational swim meet, the Splash Between the Lakes, this past Saturday 12/8/18. This year’s event was themed “The Race for the Golden Duck.” Over 200 swimmers from Y’s across the region including Alleghany, Altavista, Bedford, Danville, Roanoke, South Boston, South Side Farmville, Pulaski and Martinsville.

“It was great to see our swimmers’ hard work paying off this weekend. Not only did they swim exceptionally well, they also stepped up as leaders and team mates,” says JT Boyd the Riptide’s Head Coach.

Fun For All Ages

School delayed or cancelled? Looking for summer or after school programs? Check out our Childcare Services